Enve Composites is in the process of releasing new rims and updating select current SES models. Some rims will be discontinued including the full line of classics rims. For simplicity sake here’s a table of Enve’s new line up moving forward. I’ll get to the details after you take a look at what’s going on.

As most of you know the 24, 45, and 65 have been overshadowed for years by the 2.2 SES, 3.4 SES, and 6.7 SES and their removal from the Enve lineup is no surprise. With that being said the 6.7 SES is also getting the axe as is the 8.9 SES. This is because after years of testing in the wind tunnel and with handling feedback from riders around the world Enve has released the 7.8 SES and 4.5 SES. Now, it’s easy to just assume Enve is trying to launch new models by filling in numbers but the new rims have proven to make the 6.7 SES and 8.9 SES obsolete with updated aerodynamic profiles.

Let’s take a closer look at aerodynamics. The trend with the ENVE SES lineup seems to be continuing with wider is better. ENVE takes handling seriously and like we explained in a previous SES post, they have a steering metric to quantify handling. With the new wider profiles the SES rims are getting more aerodynamic while increasing handling stability.  The SES 4.5 is testing faster with a 25mm tire than the 6.7 SES tested with a 23mm tire. This while maintaining a stability metric better than the 6.7 SES. The same can be said for the 7.8 SES which tested faster than the deeper 8.9 SES but improved on handling bringing it to the same class as the 6.7 SES in handling. But, as mentioned before the aerodynamics performance partially has to do with the tire width as this makes up part of the aerodynamic profile. With this in mind ENVE has a list of recommended tire widths for each rim profile.

As new rims are rolled out some upgrades are being introduced.  Some have trickled down to the older models some have not. Let’s take a look at the new braking surface and the tubeless compatibility. 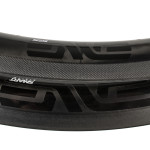 The new textured braking surface is on all rim brake ENVE rims moving forward. The textured surface is designed to reduce braking heat, a problem particularly important to address with clinchers, and to improve wet weather performance. With the textured surface it’s important to note that there’s a new black brake pad, which will be a problem if used on the old rims. In fact using the old rims with the new pad will void your warranty just as using an off brand pad will. For the smoother brake track the grey brake pad is still what you should be using.

As you can see in the table above new rims, specifically the 2.2 SES, the 5.6 SES, and the 7.8 SES, are now tubeless. There’s a lot of debate on the benefits of road tubeless and that is beyond the scope of this article. I’m just trying to help you wade the waters of ENVE’s changing lineup. So without further debate I’d just like to say if you want to go with a road tubeless setup avoid the 3.4 SES and the 4.5 SES. If you’re not worried about tubeless and will run a tube anyway you’ll be fine with any rim choice. 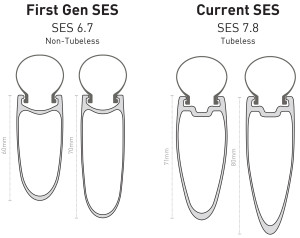