Craig, founder of EE Cycleworks, takes a lot of pride in his designs and as a result he’s taken to rolling updates to his EE Brakesets. The latest modifications rolled out May 2016 and the brakes in our store are the newest sets. 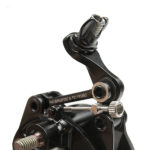 The entire centering bolt assembly has been redesigned and strengthened. The bolt has also been replaced and instead of being finger tightened it can now also use a 4mm hex head.

Some ProTour riders currently riding EE brakes, suggested easier on the fly cable tension adjustments. Craig made two changes to facilitate this. The adjustment nut is now a wing nut that’s easily turned when riding. Also the entire assembly sits in a concave ball and socket joint on the brake. The concave shape isn’t as deep as it used to be, this cuts down on the friction and lets the nut turn easier.