So to pick up where we left off in the previous post to build a superlight disc road bike.   We had the headtube assembly finished and then added the Schmolke TLO bar at 146.6 grams.  From there we can start with the brake install.  Front brake weighed 369.1 grams out of the box.  We trimmed 3.0 grams from the line and then added another 4.3 grams for mounting bolts and washers bringing the full front brake assembly to 370.4 grams.  For the rear it came out of the box at 384.5 grams we trimmed 6.9 grams of line off and then added 6.3 grams of mounting bolts and washers bringing the entire rear brake assembly to 383.9 grams. 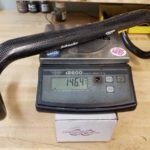 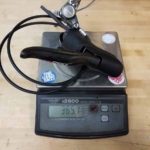 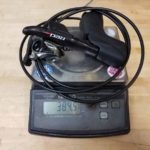 Next we worked on the bottom bracket.  The Factor frame is a BBRight bottom bracket, we opted to start with the HSC BBright ceramic bottom bracket which was a couple grams lighter than the stock Ceramic speed that comes with the frameset.  From there we removed the hybrid ceramics and installed HSC full ceramic bearings and then removed the center shield.  The hydraulic line routing through the frame is done through an area that is completely separated from the crank spindle which is nice as it means we can remove the shield without fear of the rotating spindle wearing through the line.  After those changes we got the bb down to 68.6 grams. 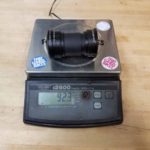 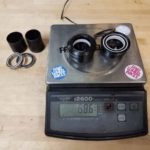 With the bottom bracket done and installed we moved on to the crank.  Here we faced a choice, do we go with a production piece (Thm Clavicula SE) which is without a doubt the lightest production crank on the market or do we go with a prototype Myth that we still have which sheds an additional 70 grams?  For now we’re opting to go with the tried and true Clavicula, which came in at 300.5 grams for a 170mm compact.  To this we chose to add a mixed chainring set, for the inner 34t we went with the full carbon Fibre Lyte at 22.1 grams and for the outer we went with the mixed material Carbon-ti chainring at 82.3 grams, bringing the set in at 104.4 grams. (again not opting for the absolute lightest setup but rather one that balances weight and function.)  We used Kcnc SL chainring bolts (7.5 grams) to put the thing together with a complete crankset weight of 412.4 grams. 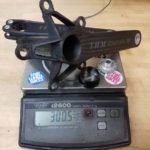 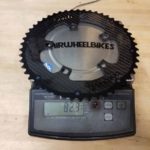 On to the derailleurs.  Not too much to do here, we’re using the Sram Etap wireless.  We left the front completely stock at 162.3 grams.  The rear was 237.4 grams out of the box.  The only change here was to remove the stock pulleys which were 22.9 grams for the set and replace them with Extralite Pulleys which were 9.5 grams for the set.  That brought the rear derailleur weight down to 224.2 grams. 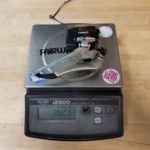 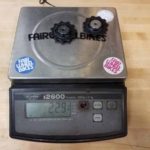 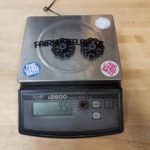 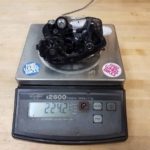 That brings us up to this point: 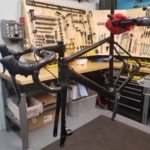 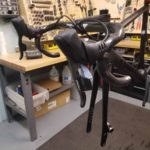 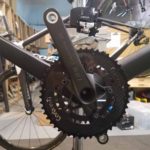