We were recently challenged by one of our taller customers to build a large hardtail mountain bike that pushes the limit on low overall weight without sacrificing the bike’s functionality and race-worthiness. That meant careful selection of lightweight components and hardware, excluding any options that could cause a notable decrease in performance. Obviously, lighter pieces will generally have a trade-off in functionality and/or longevity compared with their heavier counterparts, but the goal was to balance those trade-offs. No going with skinny tractionless tires, super narrow bars, or aluminum cassettes that don’t shift well. It seems to us we may have found a pretty good balance with this build. We’ll go over some of the highlights before posting the complete build list.

Frame:  We started with the Open One+ frame. Claimed weight for a Large is 885 grams. We started a bit behind the line, since our frame came in at 923 grams (923 grams not including the derailleur hanger, seat collar or cable stops in the frame. But it’s still a light frame for its size and well-regarded performance. To help shave off some of the extra mass we replaced the stock Cane Creek 110 headset with a set of Cane Creek AER bearings. Tipping the scales at 47 grams complete, the AER headset saved about 20 grams over the stock 110 headset. We shaved another 8 grams by swapping the stock collar for the Tune Schraubwurger.

Fork: For mountain bikes, the suspension fork is by far the heaviest single component, with even so-called “lightweight” forks coming in at well over 1300 grams. We opted for the not-so-common German:A Xcite Zero (air sprung), with actual weight at 1102 grams for a 29″ 100mm travel version with 36mm stanchions. Being a relative unknown (especially in the U.S.), this was arguably a risky component choice, but the appeal of saving almost half a pound was too good to pass up.

Wheels: As another generally heavy component of an XC race bike, the wheels were also an important factor in this build. We were fortunate enough to have access to a new, yet-to-be-released wheelset from Alchemist. Similar to their RR Marathon wheelset, these are the RR.29. Each full carbon rim uses Alchemist’s Ridge Reinforcement Technology to produce a light and stiff wheelset using their own hubs and Sapim CX-Ray spokes. Actual weight of this wheelset came in at 538 grams front and 709 grams rear. The offset rim design has an internal width of 26mm. The wheels were mated to a set of Schwalbe Rocket Ron 29×2.25 Tires at 585 and 589 grams. Whiskey tubeless tape, Stan’s sealant and KCNC tubeless valves were used to complete the wheelset.

Seating and Cockpit: For the cockpit, we used a combination of Schmolke TLO bars in a 700mm width (93 grams), mixed with a full carbon Mcfk 100mm stem (83 grams.) To complete the rear end of the cockpit, we again chose Schmolke for their TLO 27.2×350 seatpost (97 grams) and the tried-and-true Tune Speedneedle Alcantara saddle (90 grams).

Shifting: The shifting of the Open’s 1×11 drivetrain is handled by Shimano’s flawless M9000 series XTR mechanical shifter and derailleur combo, mixed with a Sram XX1 10/42 cassette. The shifter was tuned slightly with some bolt replacements and a new barrel adjuster from Far and Near, taking its stock weight of 104 grams down just a few to 99 grams.

Brakes: As with the shifting, Shimano M9000 XTR brake levers and calipers were not a difficult choice. Paired with some Ashima Ai2 160mm stainless rotors and alloy rotor bolts, this actually makes for an incredibly light, yet functional, braking system.

Crankset:  We opted for the THM M3 (372 grams), one of the lightest carbon cranks on the market, along with a RaceFace BB92 (56 grams) bottom bracket, Extralite OctaOne chainring (31 grams) and Parts of Passion chainring bolts (4 grams).  The POP bolts were at half their normal weight since the Extralite chainring already has the female part integrated.

Details:  As is often said, “the devil is in the details,” and with what is listed above, the bike is off to a great start. However, continuing to shave a gram here or there through all the little pieces can really make a difference. Some of the details used were Alligator mini I-link cable housing with Shimano cable (21 grams) Extralite Ultrastar3 expander plug (6 grams), Kmc X11SL chain (235 grams), and Extralite Hypergrips (11 grams). 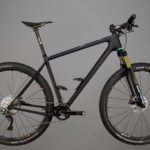 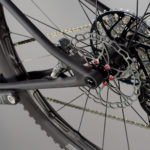 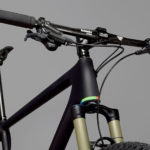 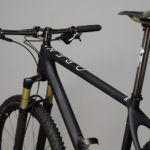 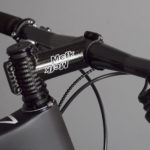 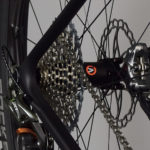 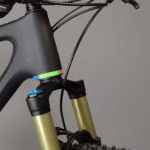 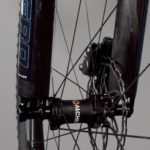 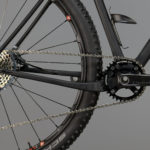